Tucker Carlson strikes me as the type who would not associate with “my type” in the halls of high school. He just seems a little….I am not sure, but occasionally he hits the mark and in the video below he defiantly scores one for clearly describing the monolithic nature of present day News Media in America. You will have to pause for a few seconds on the intro to his monologue, for a teaser concerning celeb gunk upcoming, but the monologue is worth the trip..

The link below points to a phenomena only the dead could not be aware of. But here is the ugly picture of the “fourth estate” selling out to the liberal snipe hunt for a reason to impeach. In fact Wolf Blitzer is even giving the marching orders to get it on and go ahead and impeach. the stats, as further explicated in the article linked are damning 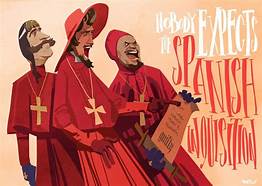 Hear are the Pythons in full inquisitional garb! GET IT?

At this moment,  Michael Cohen, ex lawyer working for Trump, already convicted for lying to congress, and two months from a prison stay for a plethora of lies he crafted to deceive congress and the American people, is speaking before another oversight committee. The session has been put together as an attack on President Trump. There are no charges levied against Trump. They are just fishing for what they can get. Anything they can get…to impeach this embattled president. Unable to reconcile the results of the presidential election, the Democrats have chosen obstruction and attack over doing the job they were hired for, legislation.

This hearing is another attack. Supported by a mainstream press, glutted with Democrats working to “get something” on this president.  The press appears to have quit their jobs as journalists, picked up the sign and joined the picket lines of protesters. With over 90% negative coverage by the mainstream press, it is clear they are partisans for the left.

In this tsunami of “gotcha” opinion pieces thinly disguised as news, one of the press has had the personal courage to step forward and state what has been obvious. Lara Logan, a journalist practically from birth, has broken rank and courageously spoken out about the bias against the president.

There is not one reporter that believes her /she can do anything personally to get this president. They know they can incite others to do their dirty work. In inciting the public to get this president they have stoked the fires of racism, and intolerance until the race relations in America are at an all-time low. Most of the vitriol being passed about, the “white privilege”, and “dog whistles” riots  and supposed “over-policing” of blacks can all be traced back to the words of anger and intolerance that virtually gush from media operatives. Never has  there been such abuse of  positions of trust.

After hearing the word collusion 5 Bazillion times in connection with Trumps name, you could hear the crickets chirping for the past couple of days. The confirmation of nothing having developed, the Oak Island of Democratic digging, the pot at the end of Pelosi’s rainbow, the apple of Schumer’s eye,  has not made a ripple in the Mainstream Medias fondest dreams of Trump destroyed. That great Lib hope of collusion has been the feast of nightly news. But since the revelation of a bucket of nothing after two years of investigation and millions of bucks spent, and over 2000 minutes of reporting, not a minute has been spent broadcasting Trumps innocence. HMMMMMM.   WHASSSSSAAAAAP?

On the other end of the ethical spectrum, The Washington Post ran an exoneration of the Covington boys the following day. The mad rush to judgment in the first few hours of the incident confirms what the average citizen already knows.  People don’t pay to find out everything is OK, they pay to see the blood flow.  Interested only when there is trouble,  people slow down to get a look at car accidents….. not salvage yards. Car accidents sell, salvage yards don’t. So any addendum to a story that corrects an error is an ethical achievement.

One study offers that a majority of Americans are looking into a screen of some sort each day. Our vision of the world is filtered through the editorial triage of the news departments of the mainstream media.  What happened to the tradition of OBJECTIVE news reporting that served as the credibility hinge pin of the American press………Klikdagraf for more…. 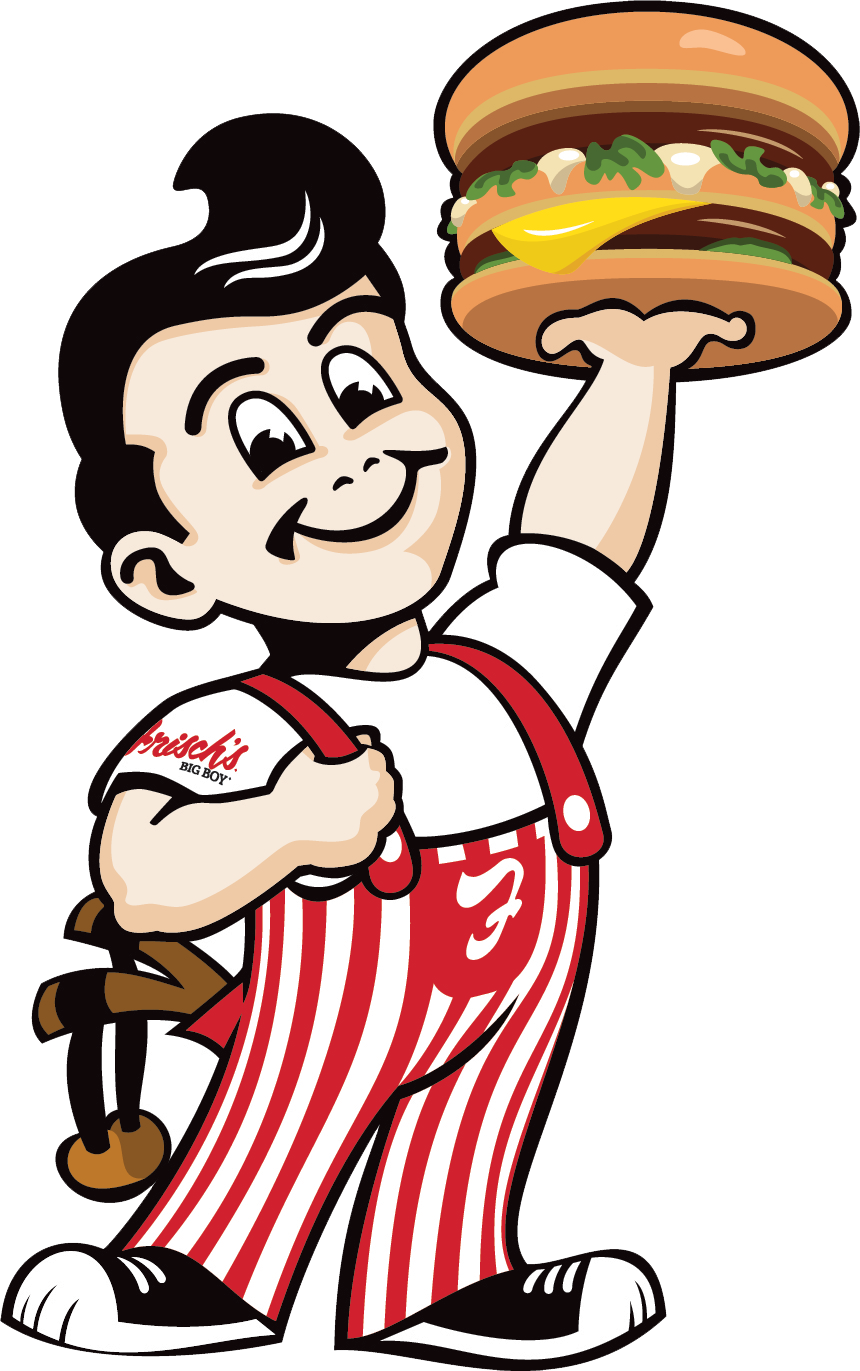 BELOW IS THE LEAD PHOTO RELEASED BY THE ASSOCIATED PRESS illustrating the activity around the capital on the morning of the vote to either confirm or reject  Brett Kavanagh as a Judge on the highest court of the land.  I know I am supposed to believe that there is no bias in the mainstream media, but when you lead the article with a huge sign that says “Kavanagh Liar” one gets the message…. And we ain’t talkin’ “Dog Whistle” here….. nothing unclear as to the left leanings of the Associated Press. Drudge didn’t help matters much, generously gifting,  with, the charming , albeit chubby bathroom wisdom…………. “The rage of the left!” with ” WALL URINAL”  Amy Schumer, raising a fist of defiance at the camera.  Imparting open and riotous rage Overall, the short article describes the mornings activities with no blathering histrionics and an interesting description of each sides attitudes and activities. 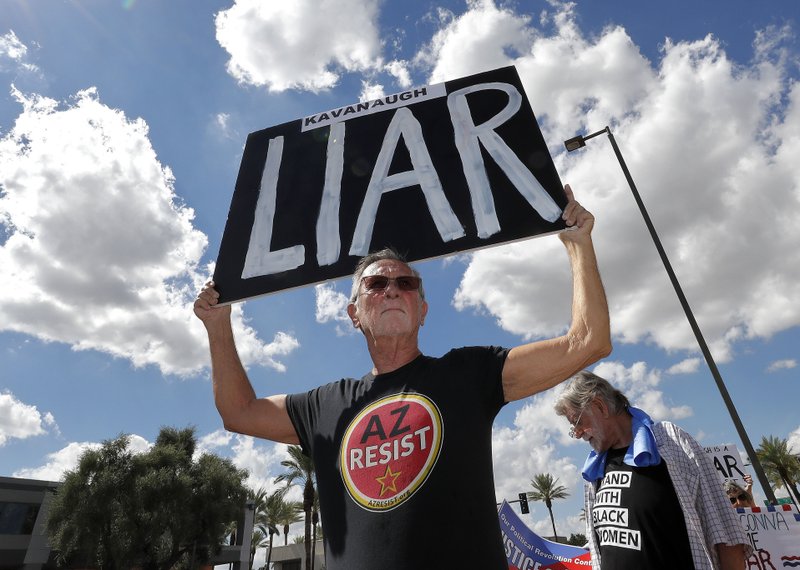 American Media is biased against anything conservative. They underreport or just ignore stories that could support a conservative viewpoint. With the ABC, NBC, and CBS screening which information goes where they can create and control the masses vision of the world. With over 90% of the press voting democrat, they work hand in glove with the candidate and administration that reflects their  political bias. …

Right now the dog pile is quite obvious. No attempt has been made in denying that they are stalking Trump, picking up every bit of garbage they find in his wake in the hopes that they can prevent his achieving the presidency.

The Grey Lady Going down

But you said you would call me… What happened?

The Grey Lady Going down on the Thugs