Nice little vid that could be called a primer of Israeli success. Their insatiable drive to excel casts me into a cauldron of guilt over what I could have achieved had I just applied myself with more discipline. “Ah me! such a waste”  mother would whisper with a note of regret.

READ THE LINKED ARTICLE OR SUFFER THE CONSEQUENSES !

In the 7th grade I was introduced to the history of the Barbary pirates and Jefferson’s difficulties with their ship-jacking off the North African coast. I was aware that there were a lot of Muslims , OVER THERE. And because they were “over there ” and not here, my pre-adolescent mind pigeon-holed the info until I began having personal contact with Muslims of various nationalities and political profiles as an adult.

THIS IS MY VAVORITE PICTURE SO YOU GET TO SEE IT OCCASIONALY. The smaller person in the pic is Deb, my woman of about three decades. I was moved by the acropolis,

but it was the Coliseum 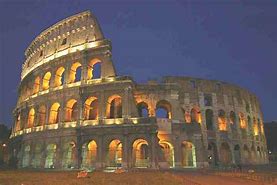 of Rome that struck both Deb and I with a strange warm aura, It was a cool evening after a sweltering summer day and as we stood gazing at the ruined amphitheater we turned to each other and, in unison, said, do you feel it?

Neither of us could figure out what we were feeling at the foot of Rome’s greatest monument.  However I had an epiphany a couple of days ago. When I looked upon the coliseum I saw the glory of two  powers slipping away. I saw the fruit of hubris in the ruins of greatness. I saw a people who quit believing in the basic values of their own country  I saw a once proud people who abandoned service to country, consumed by self gratification. I felt the stream of history flow from the past to me. I shared their humanness, and I fear sharing their fate.

After a General won a great battle he would be treated by leading a parade, (a tribute) through the streets of Rome. Behind him on the chariot  stood a slave, who would whisper in his ear, that all glory is fleeting.

All glory is fleeting.