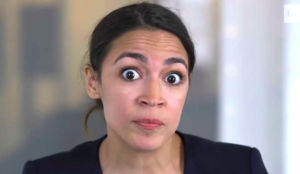 The vid below is a “rant in response” to OAC’s last idiotic statement in dredging up the lefts favorite go – to comparison when they are really trying to sock it to us with impact!…..The holocaust! I mean no heavy point to be made with the vid I posted below. It is just so funny I thought I would share it . The tinker – toys  in Ms. Cortezes skull already trivialized the horrific murder of six million plus human beings. And she used it to drive home a point she was making with FALSE information!  She is Joe Biden in bright red lipstick! In other words, she knows the taste of shoe leather and likes it! CONCENTRATION CAMPES ON  OUR SOUTHER BORDER? COME ON!

Alexandra Ocasio-Cortez claims the united states is operating concentration camps along our southern border. She even goes so far as to refer to the Holocaust in her statement with the reference “Never again.” I am awe stricken at the vast insult to six million innocents murdered at real concentration camps such as Auschwitz or Treblinka. I suppose she would rather the U.S. just turned the immigrant families out onto the streets with no support, shelter or medical attention which is what they are provided at the centers they are housed in now. Think, ponder, and meditate upon this…..She is bulldogging the democratic party. She is setting the agenda and cracking the whip over the bowed heads of the whole host of Democrats who are apparently wandering, lost in a wilderness of irrelevance.