There is a world of activity that is newsworthy. But it seems that the Mainstream Media would rather focus on bogus claims of “obstructing justice” when there is no crime to conceal and “collusion” with foreign powers when it is the accusers that have grown fat and rich selling out the United States in back-room deals over URANIUM SALES TO RUSSIA. Russia  already has a few thousand ICBMs pointed at targets within the U.S..

A MONTH OF FASTING DUIRING DAILIGHT HOURS , THE MONTH THE KORAN WAS REVEALED TO THE WORLD.

Ramadan is Islam’s main religious holiday. Your supposed to do a lot of Daytime fasting among various other traditional behaviors. And for some reason, everybody wants to be the first Jihadi on his block to kill someone for Ramadan. So you are  pretty much guaranteed a high body count racked up by Jihads.  All  other religions have committed exactly ZIP religious murders on this occasion. But they don’t have the proper religious zeal of our Muslim brothers! 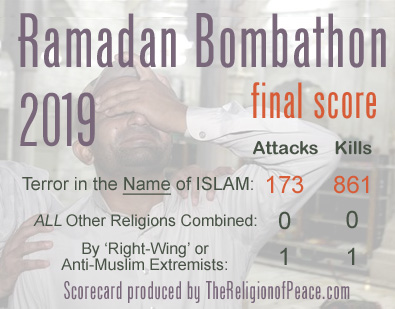