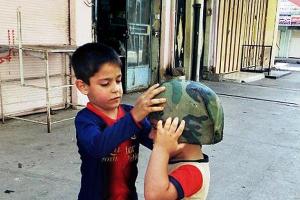 One of the hardest lessons I ;have learned about life and my relationship with other males, came as a result of a fist fight that I  lost. I was bleeding as I staggered down a hot dirt road that lie at the edge of my tiny hometown of Alva, Oklahoma. My brother happened along in his old ford pick-up. (It had a smoke stack that really wasn’t attached to the manifold) I jumped in the truck and reported franticly that so- and- so beat me up. I expected David my tough older brother to go avenge me. He refused to be seen with me for several days.

Davids reaction was wholly unexpected. I was crushed. But the lesson I learned  is that no-one can fight  my fights for me. I will either win-lose or draw and I am the one who will live with the consequences. I was given a choice, Man up or take it and like it. The fact that I can fail motivates me to excel because I don’t like failing. So toughen your skin young man and take it on the jaw. There is something  worse than death. Dishonor.