I carry. Open carry is legal in Colorado and when I am out and about  you may see the prettiest Colt .45 on my hip. The figure in the picture below isn’t me. I am a guy. The girl in the pic is an Israeli soldier. With all the “lone wolf” attacks on civilians of late, Israel is loosening it’s carry laws to allow more civilians to carry firearms. They believe some of the attacks on Israelis will be thwarted if the good guys carry firearms.  I agree. 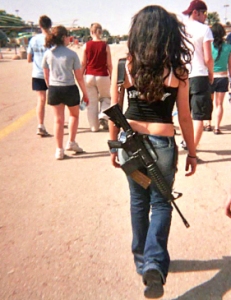 It interesting to note the comments I have received from others have been positive. Usually they say “cool” and mention the second amendment. Only one old codger, visiting Colorado from Texas, said anything pejorative about my carrying a gun. REMEMBER: IT IS BETTER TO CARRY A GUN AND NOT NEED IT THAN NEED A GUN AND NOT HAVE IT.