In the Old Testament, whenever it was said to give this city or that village to God, it was a divine command to kill every man, woman and child, as well as livestock pets etc. and thus, “give them to God” How many times has this command been made and followed in the last 2 millennia? The answer is, zip. The reason no biblical massacres have been made since, is that none but a dementia ridden fool would think to impose such biblical behavior in todays world.

An example of a religion tht didn’t seem to get the memo is Islam. Iran, in adherence to is spiritual roots and the commands made therein has taken to arresting apostates and Christians,  giving them time behind bars.

Can a religion, carrying its own legal code, and disrespecting all other legal systems, truly assimulate into another culture?

Of course  no article on Islamic conflict would be complete without a look at Ilhans status in her meteoric rise in politics since her freshman year in congress began. It seems there are 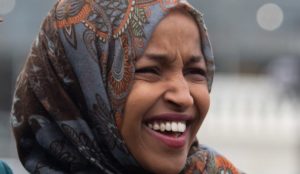 some inconsistencies in her memory of her own history.