Hamas if firing missiles at Israel again. When will the Main Stream Media come to the obvious conclusion the Israel has actually restrained themselves in dealing with the so-called Palestinians. They are the only real democracy in the middle east. Arabs, (one of which is in the Knesset.), have more civil rights in Israel than any other state in the region. Israel, called brute and occupier by college girls and the Limousine Liberal Jews  who  grouse about the “plight” of the so called Palestinians 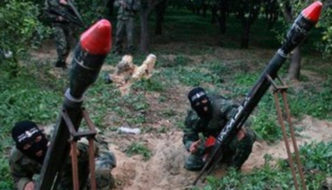