One of the great quests of Islam is the re- identification oof whatever cuture it has decided upon infecting. What was once a Sikh, Buddahist, prebyterian etc, etc., ad nauseum will be a Muslim through a process of slow coercion. The best  an invded culture can expect, if the victims decide not to become Muslim, is to be made a dimmih, (lower class entity.) THese dimmihs (anyone who is not Muslim) are destined to be actively humiliated as per the Quoran,  which commands that dimmihs are to be * “made to feel their shame”.

Example:*If a non-Muz asks for a place to stay for the night, a good Muslim might make him sleep on the floor as a sign that he is being “:made to feel” his second class status.

WHAT IS LEFT OF A RELIEF OF BUDDAH AFTER ISLAMIC FIGHTERS GOT HOLD OF IT. 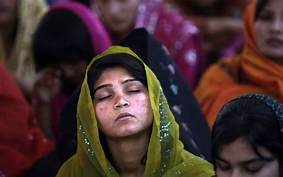 In order to supplant one culture with another a waiting game is installed with  migration, overpopulation, (having more babies than the natives),  and destruction of the history of the conquered country by destroying it’s monuments and literature.

This forced conversion is a spiritual rape. It is spiritual bullying of  a religion, that in one example states “there is no compulsion” in religion.