While the decrepit and wicked west was crafting the Magna Charta and painting the Sistine  Chapel ceiling,…….

Scrotums and penises were being cut from black captives on slave trade raids and subsequent  death marches. Use of slaves both male and female as menial servants and as rape slaves was common well into the 20th century.   Genital mutilation of female captives, also a common practice often ended in an agonizing death. along these death marches.

(It is regrettable that Gloria Steinem was not around at the time. )  The booming business of  sex-slave trade  continued for at least   1200 years, well into the 20th century.

I have been intellectually lazy, however, for neglecting cornering a feminist and pumping her for info concerning the modern feminists attitude and missionary action for the women of the Muslim culture. 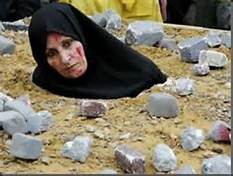 Oh! Why the deafening silence from NORMAL etc.. Apparently it is OK for the woman who is so fragile that she will ruin your life and or career over a sexual comment in the workplace but tolerate women coerced…..into genital mutilation, marriage against their will starting at the age nine and up, jailing, whipping or stoning for being raped, facial mutilation, amputation of the extremities, (arms feet etc.), etc. as  a small sample of legal judgments according to Sharia Law.

The crusaders often massacred whole villages in the quest to regain the possession of the holy land. Not much better than the torture chambers of the inquisition or our past poor treatment of many indigenous populations all over the world  As an American raised with Judeo/Christian values I feel a twinge of shame at the mention of Christian brutality, (against Muslims in particular)..

So what is the difference.

Where is our position of moral ascendancy?

The big fact, the 800Lb. gorilla sitting in the middle of our living room, is that these dirty deeds happened 1400 years ago(not to mention our near genocide of Americas indigenous populations).Remember the trail of tears, the Sand Creek massacre, or the massacre at Wounded Knee.  Christians feel more and more at ease the farther we get from those dark days following the disintegration of the Roman Empire as well as the conquering of North America and our attempts at “civilizing” the Indians.

But when the Shaw of Iran bought the farm  and was set packing in a religious coup d’état in ’79. The fundamentalist revival that has since grown, and in some quarters still grows.  The point of this revival is to turn the calenders back to the 6th century, with law based on a weired welding of Judeaism,Christianity, and Bedouin polytheist tradition.  The goal of the game is conquer, occupy and  install their values in the occupied country. A world wide Caliphate is the ultimate goal. The strategy is to do anything you can to dismantle all other societies and in the process, install Sharia as a constitutional framework.

Love was the message of an itinerant preacher proselytized two millennia ago. The spiritual power of his message still resonates around the world. And the fact of the matter is that the world is a violent place hungry for respite from the labours and horrors of a violent world. . His message was simple, but very difficult to execute. Commitment and effort, fidelity and patience are few of the disciplines of love.

Above all, the lesson we learned most deeply is that we don’t want to go back to the old days. We want our women free, equal and in possession of their own lives.