Mike Huckabee announces that her sees a third term in the tee leaves for Trump. Film tonight on the Sean Hannity Show. The mysterious alchemy of such a miracle has yet to be revealed. It has something to do with the efforts of Trumps enemies attempts to unseat him. Term limits for presidential persons have been in affect for about 60 years or so. It would take  an act of congress to ditch the present limits and I doubt that the Dems in congress are in a giving mood right now.  I don’t know but will be keeping an eye out this evening. 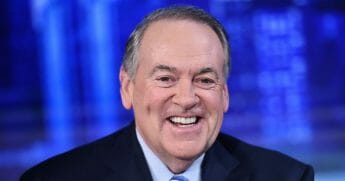 WE GAVE OURSELVES THIS ENTITLMENT! Those who have received assistance are also the people who provided the funds for fabricating all of the entitlement programs. It could be that the thinking of her base is so shallow that they never mentally  pause long enough to process the things she is braying into long term memory. Unicorns are real. We are worried  about big foot though,. Haven’t seen any recent fuzzy and out of focus pics of the fuzzy/out of focus fellow and I am concerned he is now some super-fuzzy

wall hanging in some Winnabego parked in one of our great national parks. But such things are beyond the scope of this hard-hitting journalistic endeavor.