What kind of adult drags a 13 year old child into a congressional inquiry on  impeachment? Is no concept of ‘sacred ground’ in the heart of a liberal?  Is there no place where all the axes are buried and grudges put on the shelf? An area of specialty in my career as a therapist was criminality. I found that every criminal had their limits. You may find a car thief who would never be caught dead pulling a strong arm robbery, a murderer who would never hurt a child, or a drug dealer who refuses to sell to youngsters. These areas of restraint serve a purpose for the criminal, the criminal can feel like he is basically a moral person who happens to be in  the criminal business.

My old fashioned sensitivities (63 years old), increase the shock value of these two professionals chaining a barely teen child on the pillory because they hate his parents. Professor Karlan and Jackson Lee are or the genteel gender, the custodians of societies more delicate values and advocates for those who cannot advocate for themselves? KLIKDAPIK for more…… 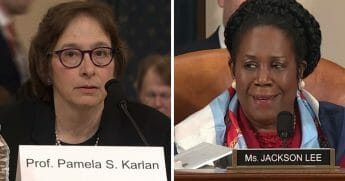 When Karlan brought the presidents son into the discussion I was ahocked,…..when I saw Jackson Lee chime in with giggles I felt that I was witnessing a court of the inquisition, breaking a 13 year old on the wheel. I see a lot, but I do not see the “Better angels of our nature” as Lincoln said. I am witnessing the demons of power hungry hyenas. Not When Trump talks about “draining the swamp” I learn two things. I learn just how much I did not know about the ‘Inside the loop’ in D.C. I did not know the swamp would grow and ensnare all who were new to it’s dangers. silently and much quicker than one thought. Be active, find what you can to serve as a cutting or digging tool. Lets get to clearing out the undergrowth.