Poor old Greece. She has been the on-ramp to the back road of Europe for millennia for every migrant marching away from the latest mid-east Armageddon  The only solid requirement one could place on the migrant is to assimilate into the host culture and abide by the local laws. It has been made painfully apparent, however that they re-create their cultures of strife even while resident in migrant camps. All prisons are mean places, gladiator schools and Academe’ of Crime etc. Respect comes with fear. Coercion and bullying in every way happen on a moment by moment basis. Power and control is the social contract in prison. It is a normal expectation that religion works against the “might is right” thought. But what does one do when it is the religion that subsumes bad behaviors? In the migrant camps the Jihadist gang run things like the mafia on hallucinogens. 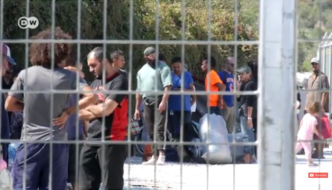 Think of it….not only do they shake you down. They proselytize about it endlessly afterword’s!