Thus it stands. Israel , a country only 70 years old, has transformed the wasteland into green fields and established itself as a progressive and open democracy. Arabs who are citizens of Israel including Arab members of Israel’s ruling Knesset , have more rights than any Arabs in the middle east.  Israel stands on the ramparts to the frontier, the far outpost of western democracy and is under almost constant fire from Palestinian “patriots.”   As much a part of the American circle of allies as Briton or Australia Israel has contributed mightily to many field of technology, medicine and horticulture.  Happy Shana Tova! 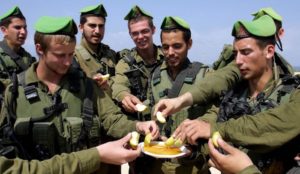