The old sampelers cautionary message, “Those who ignore history are doomed to repeat it.”  is true. Images like the pik below are a chilling reminder that such truisms do hold at least a grain of truth.  The kristallnacht of Nazi Germany that served the build-up, to world war II was instrumental in damning the standing of the Jewish/German population prior to “the Holocaust”.. One of the steps to dismantling a culture is the destruction of the foundational beliefs that serve as the superstructure of that culture. In the pik below the books being burned are Bibles. Considering the Judeo-Christian cradle of western culture, ditching the ideas in the Bible a vital step in the progressive lefts action to supplant American  society with socialism. 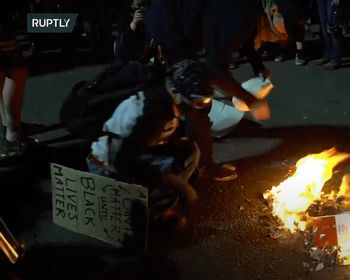 The present generation of  young adults have little interest in history and don’t know how similar their behaviour is to the “brown shirts” of Nazi Germany circa 1936. Now, we are witnessing two generations of modern day brownshirts, the fire-setters you see on the evening news each night, and the wicked teachers who taught them to hate their country and at the base of it all, to hate themselves. Now we can watch our own kristallnacht each night on the evening news.