In a huge case of BUYERS REMORSE, the people of Sweden are getting honest about their feelings concerning their new residents form the Muddle East. A  lot of old samplers could apply here ,  like “FAMILIARITY BREEDS CONTEMPT” OR, “VISITORS ARE LIKE FISH, “AFTER THREE DAYS THEY both BEGIN TO STINK” , LINGERERS,  MOOCHES, AND RELATIVES. (a few exceptions  to the rule for relatives.) but the stinky fish thing will eventually apply to cousin Ed. The expectation of migrants was different between the two populations. The Swedes expected a group of needy migrants who approach their helpers,  hat in hand, and eyes sheepishly lowered in gratitude for that which they are about to receive. “WRONG” Reality sings a different song. The host is doing what hosts do, extending a helping hand, in accordance with their Christian Principles.. The migrant, however,  aragantly carries the immutable prejudice that  the host governments are underlings pressed into service to assist their betters.

In a recent interview I had with a life-term  criminal who converted to Islam while incarcerated. He said that the best way to describe Muslim opinions of Europeans in general was .as COCKROACHES. Anyone who is not Muslim  is a subhuman. And last but not least,  a pest to be wiped out!.  He equated a anyone who is not Muslim with a nuisance that should be squished beneath some big shoe somewhere. At present It is an uneasy dance of approach/avoidance0 that has Sharia  supplanting, or at least influencing, laws of rescuing states as an issue that it is impossible to rectify with freedoms guaranteed in the Constitution.   To adopt Sharia, we must ignore  the fruit of the poisoned tree, lying in a heap at our feet.  We must understand that a legal system that has death sentences for gay people include having a wall that  pushed down upon them or being pushed from a high place to their death. Amputation for theft, first offense = one hand, and second offense =. the opposing leg!.  Last, but not least, Female Genital Mutilation…….. the nightcap on a evenings entertainment of bloodletting and mutilation.  KLIKDPIK on all the links below for good articles on all these issues. 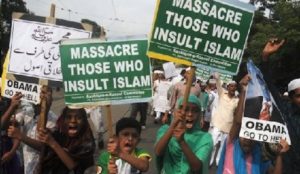