Rasmuss  Paludan , an  emerging political leader in Denmark,  speaks to the issue of “The Great Replacement” . Muslim immigrants residing in  Denmark are aware that their birthrate is greater than those of indigenous Danes and that all they have to do is continue to have children and remain in place,  They will “replace” the Danes with Muslims and thereby take Denmark for their own without firing a shot. KLLIKDPIK for more on this important issue. An issue that all of Europe is having to face. 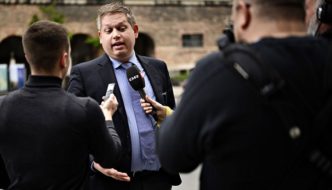 ANNOINTED AS A POP CULTURE ICON, OMAR HAS BEEN GIVEN AN UNLIMITED PASS TO MAKE ANTI-SEMETIC JABS WHENEVER SHE GETS THE URGE TO SPLURG.  KLIKITSLI

Rashida Tlaib  declared the moment she was elected, “We are going to impeach that motherf…ker”  Then she follows that up by declaring she gets “warm feelings” when the holocaust is mentioned because of the warm and generous welcome her people “Palestinians” gave the immigrating Jews from Europe.   Of course if she had read a book she would have known that upon being given that slip of land by the British,  Israel was attacked by three armies , the Egyptians, Jordanians and Yemenis. The first years were anything but a warm welcome. The Israelis were fighting for their lives against all that the Arab world could muster against them. And the folks that fled “Palestine” were running before the tanks of these arab armies………… not the forces of the Israelis. But she is just too ignorant. She made a fool of herself. LOUDLY!