After the Walls of Jericho came “tumbling down” and the Israelites “Gave the city to God,” ( “Giving a city to God” meant, in biblical terms, kill everything with a pulse, including livestock). In a sense, they were giving Jericho BACK to God.  The massacre of Jericho was an “anointed” action, committed on direct word from God. Understanding the extreme emotional toll exacted upon their fighters,  Israeli  soldiers were made to sequester themselves away from the main population for about a week.  They were expected to  attend to spiritually  cleansing themselves before rejoining their families and community.  In other words, even considering the bloody standards of Biblical antiquity, the horrific toll taken on the combatants was known and treated.

Societies are filled with contracts. One of the contracts is the ten commandments. The prohibition on this commandment being broken goes all the way to death. So the conflicts born by the soldier are  deep and damaging. “Thou shall not kill.” From cop to executioner in half a second….the choices come fast and lethal. These men, unless they have run a muck and started spraying the barracks with bullets, should have our support. The Viet Nam era taught me that there are two theaters of casualties  in war: Physical and Spiritual/.. The Viet Nam vet, who arrived home and were spat upon, sometimes never recovered from the experience. It took America as a whole, thirty years to almost get over the “Viet Nam Syndrome”. But there is still a lingering discomfort at the  root of the American psyche…….Gun shy and flinching a bit, we are finding our way back. THe most profound lesson we have learned was that peace has casualties too.  Our men need our support. When a society asks it’s members to break an important taboo, They need a forgiving embrace, like spiritual body armour. After thirty years of Viet Nam doubt,  festooned with specters of shame, we came to realize, that win or lose, we must be there for our soldiers They must be sure that love them, and as a nation we  vindicate them. And that we strive to keep America a righteous nation, a nation proud enough to be worth dying for.

Matthue Golsteyn   PLEASE LET’S NOT BREAK OUR CONTRACT WHITH HIM. 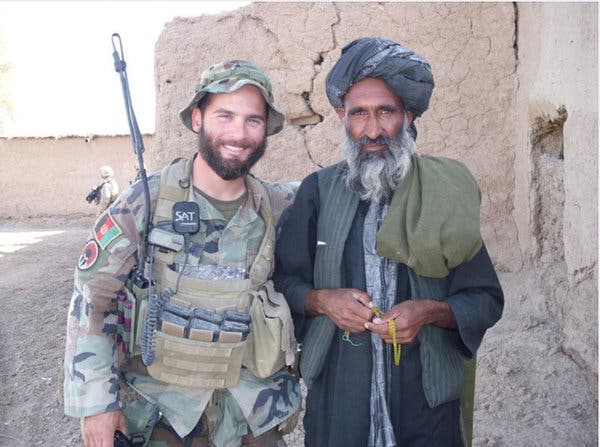 MATTHEU GOLSTEYN WITH THE MAN WHOS LIFE HE WAS TRYING TO PROTECT BY KILLING A BOMB-MAKER WHO HAD ALREADY KILLED TWO OF HIS MEN.

American involvement in backing and advising the conflict between Yemen puts America in the crosshairs of being involved in military actions in a conflict rife with crimes against humanity. We would be better served backing out of this conflict.