Below is a photo of Ivan Bracken holding his great-grandson, Jacob, in his lap.  It was a good moment In our struggle against the nightmare of brain dysfunction.  Ivan died of dementia a few days ago. He was my wife’s father. This is a battle that we could have placed on the shoulders of others but Debra,( his daughter my wife) promised to care for him and keep him out of the nursing home for as long as she could. Before it was over, before death freed him, (and this whole family) his symptoms were so severe that we could find no long-term care that would take him. She kept her promise. 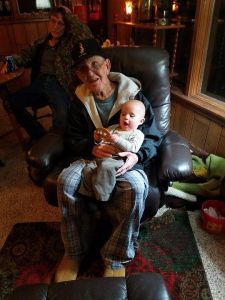 We are just beginning the journey back to the world. We emerge shell shocked and lost, with no idea what to do next. Brain dysfunction is difficult. Brain damage with the victim still walking, is more difficult. Brain damage with the victim agitated and angry is a twenty-four hour a day seven days a week struggle with no moment of complete rest and no refuge.  We are just now realizing the depth of the damage we have suffered in keeping her promise.  I took Deb out to brunch a couple of days after Ivan passed on and we were both amazed that we could just leave the house without either taking poor Pa-pa with us, or at minimum, arranging for my youngest daughter and son-in-law to watch after him. Back before his struggle with brain disease he was often a difficult man, he had his faults, as we all do, but was basically  a decent man. It was heartbreaking to see him deteriorate.

Deb at difficult moments,  when she felt like she was inflicting him on the family that helped care for him and keep him in the home. Sometimes  her strong heart would give way a little, and she would say, “He was never like this before!”  Even Ivan, (if he could) would agree.  He would rather take a bullet rather than endure the slow pain wracked transformation from Dr. Jekyll  to Mr. Hyde.

There is no way to convey the hell wreaked upon both Ivan and those who cared for him in the past couple of years. We just have to let the dead take care of their own, and go on living for the living.     Below is a picture of the family, on the far left is Deb and on the far right (the ragged looking big guy) is me.. Between us is the family. And in the middle of it all sits Ivan.

May he find in death the peace the disease robbed him of in his final years. Did we do all we could? Could we have done it differently? We could question ourselves forever.  But I believe these doubts should be buried with the man. We are vetrans of our war with dementia an we should walk on.There are grandchildren to raise and a lives to be lived.

I am grateful   for  the effort in caring for Ivan by my youngest daughter Alexandra and son-in law Anthony. They helped define the deeper meanings of family.  But I must close by saying I have been enriched by having been a part of Debs daily fight to provide the care and dignity she felt he deserved.  But for their help we could not have done it.. She is a hero of the brightest magnitude. I am privaledged to share my life with a woman of such character and through the tears, such courage.   She has nothing to regret. She kept her word. I am so proud of her. 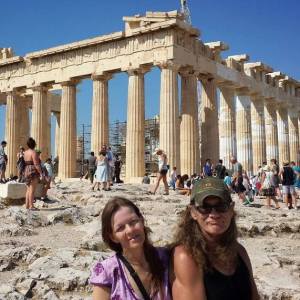