I average only a couple of responses a week in this blog. Not much fervor for a dude who is the great (unknown) champion of truth, justice and the American Way! … just stuffing messages in bottles and pitching them into the sea.   Motivation lags,  I wonder if I am foolish to maintain such an underproductive enterprise;  Then, when I take a quiet moment to think about it; I realize that I must continue, there is nothing more meaningful I can contribute.

My  abstracts are but a warning to western civilization. I am harbinger to the turn of the great wheel of history. It is the twilight of American Empire, when the dream of the entire world  is an American  reverie.  Without a shot fired, each sovereignty has fallen before the shallow onslaught of a free market economy, before McDonalds and KFC began to hollow out the dream of Soviet success.  Across the industrial (and post industrial) world eyes are upon the west; (us)!  What we wear and listen to, what we think is good and bad, what is important and unimportant. Ours is, above all, an “Empire of Envy”  spreading through all the world, shaping other civilizations to our standards.  While  Marxists rend their cloths and gnash their teeth at  our “diplomacy of dissipation.”

This turn of the wheel, (our turn)  began rolling at the fall of Rome. Of the countless theories concerning the fall, the loss of the basic beliefs of the culture always accompanies the dissolution of a society. And now, basic values, such as the Judeao/Christian work ethic, honesty, humility, industry, generosity, etc… are abandoned.  The American culture, as founder of the feast and guarantor of basic freedoms, is being deliberately dismantled according to whatever is the latest social experiment the progressives are imposing on the American people   American self-reliance, has been replaced by a dependency culture. Commitment to a partner has been supplanted by a “Oh well” vision of personal commitment (divorce has hit and passed the 50% ranking). Natural ambition is seen as one of few sinful sins left.   The thought of loftier goals than self-satisfaction is now…. “SOOO…LAST MILLENIA.”

It has turned full circle; our Empire is about to be crushed beneath the wheel of history. The beliefs and dreams that fired the heart of patriots has met the enemy of all holy quests…..success!  The revolution is over. The land has been torn from the grasp of it’s former owners and is ours. The physical challenges of nature have pretty much been tamed.  We are fat, couch-locked and lazy.  And regrettably, our Empire will end, not in a bang, but a whimper.

“Dissipation”  The nuclear family, father, mother, daughter, son is rapidly fading.  The nuclear family is the brick. And our beliefs are the mortar that binds it all.  All behaviors, public and private are scored deep in the psyche of each person through those prototype family relationships… mom, dad, bro and sis.   The prototype relationships teach the emotional language of early family interaction. On the deeper levels this is the only language we understand inherently. We tend to drift toward relationships that speak that language. We will all find our mother and our father, brother and sister in those we encounter throughout our lifetime.  It is the language of the marrow, deep, indestructible. 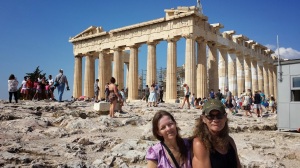 Deb and I went to Europe last year. I have a little sand and some pebbles from Omaha beach that I keep on my knick knack shelf. I stood on the Acropolis, I have walked the Apian way. We visited with happy people in happy countries from Rome to Amsterdam.  HOWEVER, and this is a big however, in the year since that happy time the mass migration from Syria and other points mid-east has swamped Europe. A large portion of these refugees hate the West and are commited to the “not so polite’ destruction of the very countries that have given them refuge. With these  pernicious guests comes the failure to integrate, the no-go zones (even the local constabulary cannot tread in the restricted areas) and an underlying contempt for their hosts.   All is founded in principals that have long since been relegated to the foul battlegrounds of the 6th century Muslim incursion into Europe. Now they are back and trying to occupy eastern Europe again!

Deb and I lucked out. I don’t know how Europe can ever recover from the knife through the heart she has taken in the last year. The brutish cult of Mohammad has infested all of Europe. The attitude  is one of siege warfare, with “No Go”  areas  where even the local police fear to tread.